Our mission is to furnish fire protection and other emergency services to our community; to maintain and continually train active members in the most modern and approved methods of fire prevention, fire suppression, and emergency medical services.

Our vision is to be a responsive, dynamic, well trained team; To be recognized by our community and members as a model of excellence in providing emergency services through education, prevention, and mitigation.

In 1958, the Big Ivy Men's Club discussed the need for an organized fire department. On May 13, 1958, a meeting was held at Mayor Ed Cannon's house; it was voted that a formal fire department be established, and Dick Dillingham was voted in as Chief. After the meeting, $500 in donations were collected with $150 being from the Men's Club for the purchase of a used 1938 Ford truck from government surplus.

The fire deparment started with 26 members; they met at the Dillingham store every Thursday night. They housed the first truck in the mayor's tobacco barn until repairs could be made to be able to heat the garage at Dillingham store to keep the water from freezing. They ran on donations and fundraisers for several years until a fire tax was established to provide funds for operation. Strangely enough, the first call the fire department received was for a structure fire at the mayor's house resulting in $900 worth of damage. The department ran approximately 10 calls their first year.

In 1960, the department purchased property for the first fire station for $1,000. The County gave the department another $1000 to get them started and the community raised another $1,800 to build the first fire station, which was two bays. In the early 1970s, they borrowed $20,000 from an Asheville attorney and added two more bays, a kitchen, and meeting room. In 1983, an upstairs was added across the entire top of the building for office space, a training room, showers, and living quarters.

The first new truck the department bought was a 1965 American LaFrance. The truck was purchased by Chief Dillingham for $12,000 on a handshake. A fire engine today would cost $500,000 and would surely take more than a handshake to get it delivered.

Chief Dillingham retired in 1980 after 22 years of service to the community. Maurice Edwards took over as Chief for 6 years before moving out of town for his job. Roger Maney (who is still with the department) was Chief for the next 12 years, followed by our current Chief Kevin Mundy. All of the men have contributed a great deal of time and effort to make the Barnardsville Fire Department what it is today. 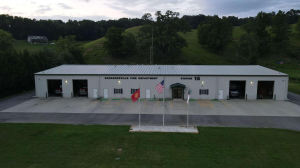